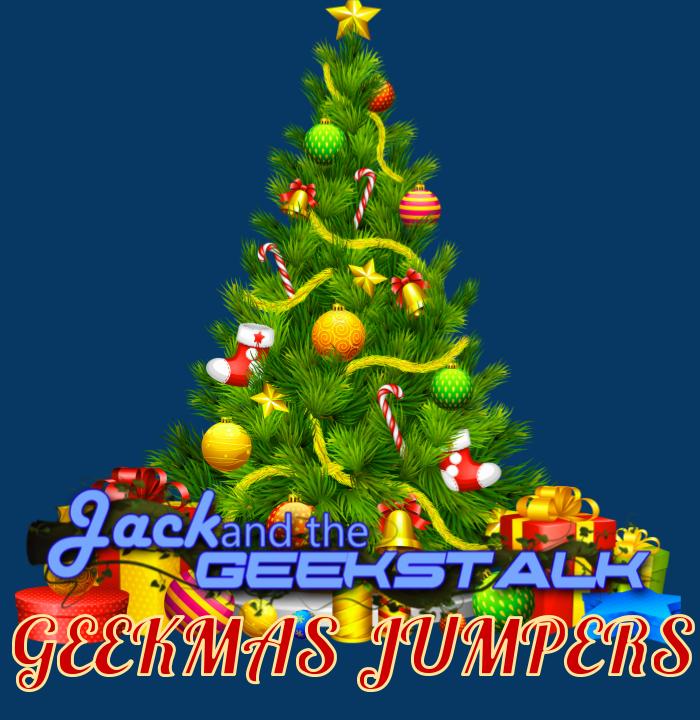 This year there are some equally awesome geeky festive fleeces on offer and I thought I’d share them with you, both to keep you warm and to vicariously shop rather than actually bankrupting myself on items that can be worn for a limited window of time each year. [Full disclosure: I *may* have worn my Harry Potter Christmas jumper through most of the year.] 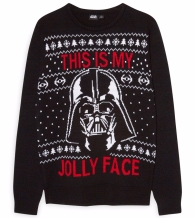 If you’re feeling the presents (sorry), or are just a big fan of the Dark Side then this Darth Vader jumper might just be for you!

I could see this being particularly good for anyone who has a tendency to come over a little ‘bah humbug’, and it being black means any dropped morsels of Christmas dinner/tins of chocolates will be less noticeable! 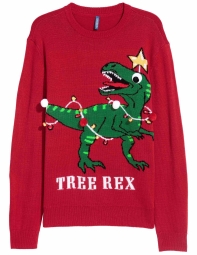 This possibly isn’t technically geeky, but if you’re a fan of Jurassic Park (who isn’t?) then I feel the T-Rex jumper will appeal. What isn’t to love about a carnivorous dinosaur wrapped in Christmas lights?!

Red and green are basically the original Christmas colours, and they’ve even called it a ‘Tree Rex’ to ensure full festive effect. Oh and it has actual pom poms on it too . 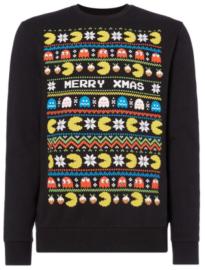 For fans of retro video games, there’s this Pacman jumper from Sainsburys. You can pick it up whilst gathering essential supplies (rum, After Eights, bread sauce and pigs in blankets), and I challenge anyone to not subsequently walk around the shop aisles pretending to be either Pacman!

They also have a few other geeky styles in the TU range – including a Chewbacca unhappy with socks! 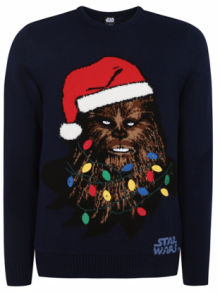 Speaking of Chewbacca, this jumper from Asda features everyone’s favourite wookie. Not only does the jumper actually light up, but maybe the threat of the wrath of a wookie might give you an edge in any family board games!

Star Wars is clearly a popular choice this year, George have also got a BB8, a Yoda and a Darth Vader jumper on offer, as well as a festive Stormtropper t-shirt.

Note: as a direct result of Lou writing this post, Dave went and purchased this exact jumper! 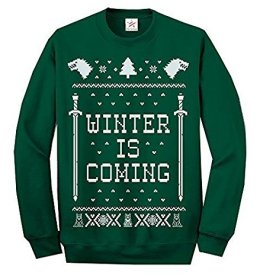 We all know that Game of Thrones is a cheery programme, all about the joys of family – so what better homage to make at Christmas? This ‘Winter is Coming’ jumper is available in blue, red, black and green from Amazon, and whilst the design is a little stark (again, I’m sorry) there is a whole Christmas tree and two snowflakes, so no-one can deny its has a festive feeling. 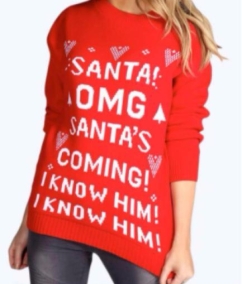 This Elf jumper might mainly be words, and limited merry motifs or pretty patterns, but I bet you read it in Buddy the Elf’s excited tones!

Definitely one for Sammi from Jack and the Geekstalk, and surely the living embodiment of Christmas  spirit deserves a special dedication during the festive period?! 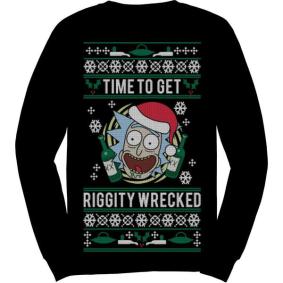 This Rick and Morty one is both festive and fun for fans of the show. I’m sure the sentiment of drinking excessively will be something of an appeal to some. The design is very festive, and Rick in a Santa hat is something anyone who loves the show would want.

Forbidden Planet also had a Ninja Turtle and Adventure Time design too. 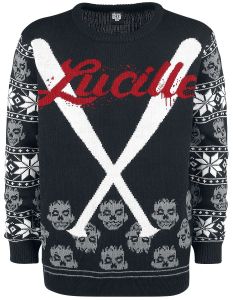 This Lucille Christmas jumper is a lot pricier than the others mentioned here, but I as Walking Dead inspired offerings a likely to be a rarety I figured I should include it. It might not be the ideal outfit choice for family dinner, but maybe a marathon of the series during any time off work?

EMP is always a treasure trove for geeky clothing, and Christmas jumpers is no exception. They have loads of geeky offerings, including Batman, Superman, Captain America, Supernatural and a whole host of Nightmare Before Christmas ones. 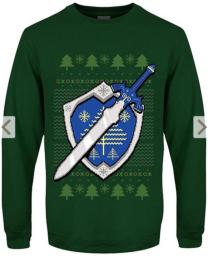 For the Zelda fans, this Master Sword jumper by Popart UK will definitely appeal. The Christmas tree motif and colour are infinitely festive, and combined with a green elf hat, could create a Christmas Link cosplay!

I also found a Harry Potter and two Pokemon jumpers on the Tesco Direct website, all made by Popart UK. 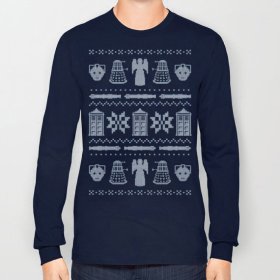 I know a few Whoovians, and this jumper with a pattern made up of the Doctor’s enemies and the T.A.R.D.I.S. would be a hit with most of them! Let’s face it, Doctor Who Christmas Specials are basically law in England.

Etsy is great for an alternative to the high street, and always yields good results for geeks. I found loads of options, and struggled to narrow it down! 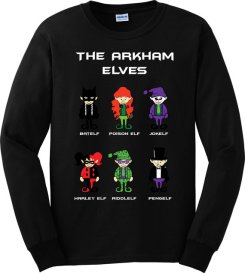 The Arkum Elves jumper from FunkyGifts4U is another Etsy find, and is delightfully mischievous. Batman and his villains dressed up as elves for the festivities is genius!

The same seller also has an awesome Elf Avengers and Baby Groot Merry Christmas jumper. Either of these would be fab in kid size too, for matching geeky jumpers!

That is it for the list. This is by no means exhaustive, and there are so many others I could have included but then you’d have been reading this post into 2018! Let us know if you end up with any of these and show us any others that you have or spot by tagging us and using #geekmasjumper