Guardians of the Galaxy Vol. 2 News

IF you don’t want to know anything about the next MCU sequel then look away now!

SDCC 2016 revealed yet more details about an upcoming movie and while the audience at the Guardians #2 panel got to see some footage of the film, us average Joe’s are still without a first look.

Never fear however, we have had some story details confirmed at the panel and some of them appear to be huge spoilers but James Gunn insists that they aren’t! SO let’s go through the interesting snippets that were revealed!

When we saw Michael Rooker’s Yondu for the first time a lot of people complained that his look didn’t match that of his comic counterpart. The blue skin was there, his Yaka Arrow and the rest of the Ravagers, but where was his head fin? 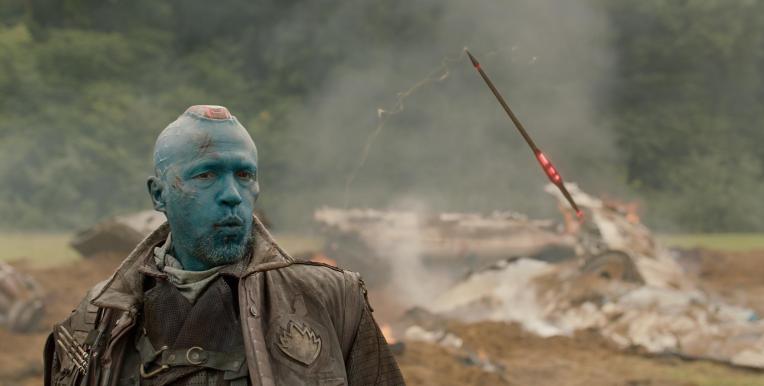 Instead of a fin we got some kind of metal implant that slightly glows when using his arrow.

Well it looks like that has been rectified for the sequel! Appearing in full costume on the panel Michael Rooker spotted a new look for the character.

Here we see the head fin in its full glory! It still looks to be made out of the same metallic material from the first film, could this be an additional implant he has had? Or maybe it was inside his head the whole time and he can choose when it comes out? Maybe he uses it to scare off larger predators when threatened, much like a bird!

I’m glad they decided to complete his character look and I don’t blame them for keeping it until the sequel to do so, after all there was no guarantee the film was going to be a success so it was probably safer to tone done his appearance.

Prior to SDCC 2016 we got our first look at the new Guardians team in some concept art.

All the usual suspects are there, Star Lord, Drax, Gamora, Rocket and a Baby Groot! As we know at the end of the first film Groot sacrificed himself in a tearjerking moment to save his friends and has had to regrow himself from scratch. The fact that he is still really small suggests that the sequel is set only a short time after the first.

Star Lord and Gamora have slightly different outfits, with the former wearing some kind of chest piece. Could this be a new device he will be using? A jet pack of some kind? It seems to have a harness and so maybe he has upgraded from his rocket boots.

You may have noticed that there are some new members on the team. Yondu (minus the fin) is in the back leaping from an explosion , suggesting he will team up with the Guardians instead of trying to hunt them down.Nebula is a interesting addition.

Last time we saw her she ran away in defeat after losing her battle (and hand) with Gamora on Ronan’s ship. What will bring her into the fold again and what will force the Guardians to accept help from someone who has tried to kill them on several occasions?

And finally we have a brand new character, Mantis. Traditionally a green skinned character with antenna, originally from Earth, James Gunn has confirmed the film version of the character will be full alien but will not have green skin, presumably because there already is a green female alien on the team!

Very little is known about her role in the film but she will appear alongside Kurt Russel’s character at first before working with the Guardians. What can she bring to the table? Will she have similar powers to her comic counterpart? It’s about time we saw a super-powered alien rather than just a really strong one or one that is really good at fighting!

Possibly the biggest reveal was Kurt Russel’s role. We have known for a while that Star Lord’s father would feature in the sequel and James Gunn has now confirmed that Russel will be Daddy Star Lord. Although it might not be in the traditional sense.He will be playing a character called Ego the Living Planet.

Looks weird right? Sounds even weirder? Well apparently Ego wanted to know what it was like to be human so created an avatar-like version of himself and went down to Earth and got ‘friendly’ with Peter Quill’s mother.

Gunn has stated that the reason this news has been revealed is that it’s not the big twist in the film, that is still to come! If this isn’t the twist then what is? Ego is incredibly powerful in more ways than one and why does he come into contact with the Guardians? Does Peter search him out? Will they work together or will they be fighting him?

So a living planet….who is consistently a villain the comics….interesting. Part of me really wants him to look like the above picture, planet with Kurt Russell’s face on it! All of this news has just increased my hype even higher than it already was. I can’t wait for this film to hit our screens and I’m sure we won’t be disappointed when it does. In Gunn we trust!

What do you think about the recent news? Excited to see the film? Let us know in the comments below.