Any success that Team Arrow has had in the last few episodes is short lived. Darhk is in prison, but how long will he stay there? The totem has been destroyed but is it de-powered? Things go from bad to worse in this episode and the Team will never be the same again.

We start off with Andy Diggle pulling a gun out of a secret safe in John’s apartment. He is interrupted by John who asks him what he is doing. Andy tells him that HIVE know he is alive. Some dude with a creepy smile and a missing hand reached out to him, wanting assistance with breaking Darhk out of prison by hijacking a missile shipment.

John and Andy take this information to the rest of the Team. John offers to put Andy inside HIVE as a double agent but Oliver is not happy about this. He still doesn’t trust Andy. Oliver is worried HIVE are going to get the Totem back (maybe you shouldn’t have put it back together!!)

Oliver finally tells the team that he has seen the totem before back on Lian Yu, which he probably should have done a few episodes ago. Laurel even comments that he loves not talking about that place!

The Team splits up at this point as Oliver apparently has to go to the new Mayor’s acceptance speech, Darhk’s wife is now effectively in control of City Hall. She tells Laurel that she wants to appoint her as the new District Attorney, with a fleeting comment that she wants Laurel to be too busy to prosecute Darhk.

John and Oliver stake out the Missile shipment and are rewarded when it gets hijacked by both Ghosts and League of Assassin members. Our heroes head in to stop the hijack and almost take out Andy who was disguised as a Ghost. Oliver thinks it was too easy to stop the attack, it must have been a diversion! 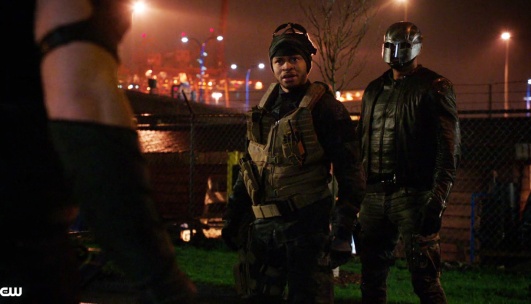 Thea and Laurel are back in the Arrow Cave keeping an eye on things. it isn’t long before Malcolm Merlyn turns up with some League soldiers. They are here for the idol! Thea and Laurel fight well, Laurel manages to take down about 4 assailants at once and Thea almost takes down Merlyn! 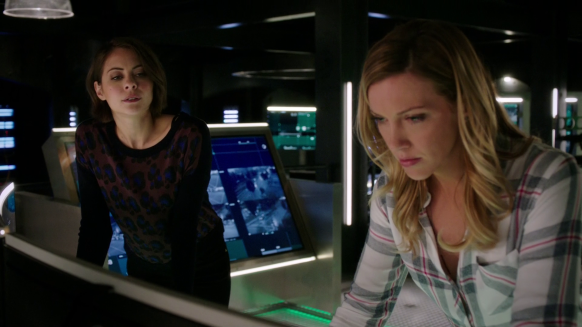 Ultimately, Merlyn escapes with the idol and the ‘Magician’ vanishes into the night. Oliver comes out and says that he thinks Andy played them. It would explain how Merlyn knew where the idol was and the right time to attack. 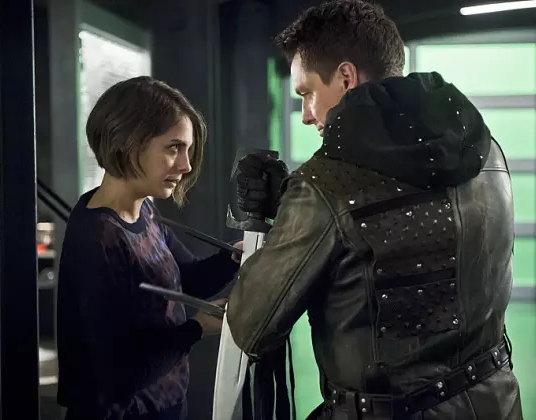 Laurel is considering taking the DA job, Detective Lance says he is finally glad that she is the Black Canary. If she takes the job she will be in the firing line of HIVE, and she will never be able to be the Canary and DA at the same time.

Andy has found Merlyn. He calls the team to a warehouse only for them to be ambushed. Andy takes an arrow for Oliver which reinforces John’s trust in Andy. Oliver is still skeptical. John tells Andy that Darhk can’t use his idol because they still have a piece of it, he hid it himself, but Oliver tells John not to reveal where it is.

Darhk is not happy that the idol is missing a piece. He will not follow through on his deal with Merlyn (to spare Thea and Merlyn from project Genesis) unless it is complete. Laurel has ordered a search of Darhk’s cell to see if he has the idol but it has been hidden elsewhere.

Oliver finds Andy searching John’s apartment. He claims he is looking for surveillance but Oliver thinks he is looking for the idol piece. Slamming him against a wall, he threatens to torture him to get him to confess to working with HIVE. John comes in to find them and points a gun at Oliver, demanding he let his brother go.

Later in the Arrow Cave, John tells Oliver to stay out of his family’s business. Just because Oliver himself can’t come back from the darkness doesn’t mean everyone is like that, some people change. Adding extra venom, John says the reason Felicity left him is because he can’t let go of that darkness.

Laurel has decided to turn down the DA job because she doesn’t want to give up being the Canary but Oliver says she owes it to herself to have the job she always strived for.

Meanwhile Darhk has arranged his own prison break with the help of Mr Sewn Mouth. Fellow inmates have broken out of their cells and started killing guards. Laurel tells the team that she can’t prosecute Darhk if he isn’t in custody so they suit up and hit the prison. One last time as Canary! (foreshadowing much?)

Lance causes a distraction so the team can slip into the prison including Andy who John brought along. Malcolm also shows up and Thea takes him on again but Malcolm bests her. He says it is because she has lost part of herself when she was cured of the bloodlust.

The rest of the team arrive just in time to save the hostages but this is where things go horribly wrong. Darhk has a gun pointed at Andy and John gives up his weapon, forcing the others to do the same. Andy then shows his trues colours! He gives the missing piece of the idol to Darhk!

Andy has been working with HIVE this whole time and has told Darhk everything about the team. Darhk repairs the idol but gets two arrows in the stomach courtesy of Thea. He starts bleeding and needs a sacrifice to get his powers back! Drawing the life force from a fallen prisoner he is back in control!

Holding the team up with his powers, Oliver manages to fire and arrow at him but Darhk easily catches it. He then tells Laurel to give a message to her father, he is someone who makes good on his promises, and stabs her in the gut with the arrow!

Darhk an Andy escape as Oliver rushes Laurel to the emergency room, still dressed in their vigilante gear. The doctor tells him to leave so that the trauma team can work. Detective Lance has been arrested for knocking out Lt Pike as a distraction, another cop tells him that Darhk has broken out and hurt the Canary in the process. He pleads with her to let him go!

The rest of the team arrive at the hospital (including Felicity) just as Laurel comes out of surgery. She is going to be ok. John apologises to Oliver and says if anything happens to Laurel it is all on him.

Oliver and Laurel have a private talk. She doesn’t want to give up being Canary because it makes her feel alive. She is happy that Oliver found Felicity but he will always be the love of her life.

When Oliver asks why she is telling him all this now, she simply says that she now realises anything can happen, she makes Oliver promise her something but the camera cuts away before we know what this is!!!

The next thing we see is the trauma team racing into her room! Laurel is seizing and Oliver doesn’t know what is happening. There is nothing the doctors can do and Laurel loses her battle, the Canary is dead! 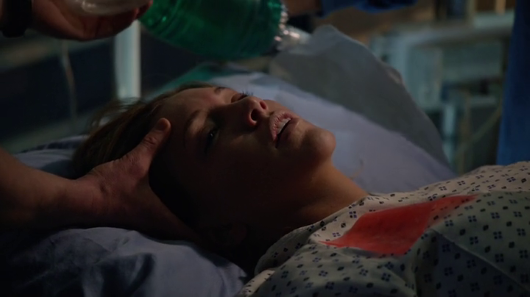 The Team’s reaction is incredible. Every single on of them is distraught and if you didn’t tear up watching this you have no heart!

Oliver feels lost, he leaves the room only to meet Detective Lance coming down the corridor. He knows what has happened just looking at Oliver’s face and he collapses to the floor. He has lost another daughter. 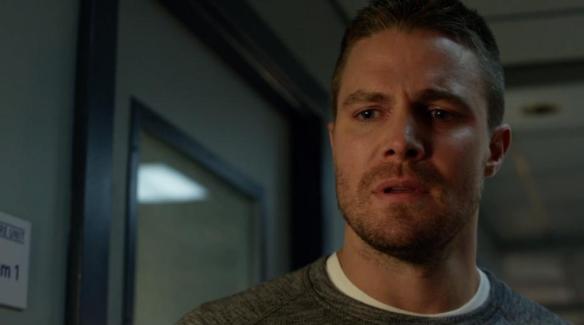 Here’s a few things that jumped put at me during the episode:

It was such an emotional end to the episode and the acting from everyone in that scene was amazing. I’m glad they made a call back to the love Laurel had and still had for Oliver, it felt like their relationship had come full circle.

Making her appear to recover from her injury made the death that much harder hitting! There was worry followed by intense joy when the team hear that she is ok. But then this is ripped away from them. They all lose a bit of themselves as Laurel was the on character that held the team together, she was generally the one consistent member of the team, even when she wasn’t a full fledged member of Team Arrow.

I haven’t mentioned the Flashbacks in the recap because there wasn’t much going on in them. Basically Diana and Oliver share stories of their past lives and they promise if the don;t make it out the other one will go and tell their family what happened. We also see that Oliver still has the photo of Laurel as a reminder of home. She has this photo still when she dies in the hospital so that was a nice link.

Other than them trapping Reiter in the underground tunnels with some C4, there wasn’t anything else to take from the flashbacks.

How will the team cope without the Canary. Is Laurel the one in the grave? It’s a pretty good bet now that she is. What did she make Oliver promise? Has this pushed Oliver over the edge? Will he give into his darkness and go for Darhk’s blood? Tune in next time!