The time travelling story continues this week but still the team have yet to leave 1975! There always seems to be a reason they cant leave yet and I’m beginning to worry that the shows budget won’t allow them to travel through time as much as I would like.

The team splits up to have their own adventures this time around giving each character a change to develop and build some relationships, however brief, with the others. Let’s get straight into it!

Rip Hunter is starting to struggle with his mission. They have so far had no success in taking down Vandal Savage and have lost two people in the process. Rip has no plan to go forward but tries to deflect the team by giving them something else to focus on. 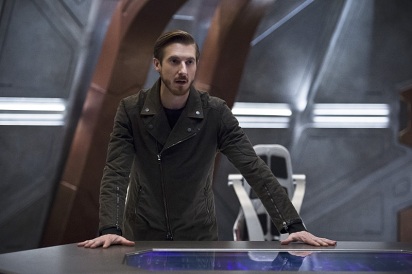 Kendra is still badly injured and they cannot risk another time jump lest it worsen her condition. Rip suggests that Jefferson Jackson repair the smaller ‘Jump-ship’ which the Waverider carries so that they can make smaller time jumps and make progress with their mission.

Sara challenges Rip and discovers he has no plan and she suggests using a lesson of R’as Al Ghul, if you cannot take the head of an enemy, take its heart.

The pair decide that Savages’s power comes from his fortune so they will endeavour to take his money from him. Rip wants to go alone, he cannot have another person’s blood on his hands, but Sara won’t let him.

Infiltrating the bank where Savage’s money is held, Rip tries to locate the money but instead finds reference to something called ‘The Vessel’ which appears to be very important to Savage. Sara quickly realises that the entire bank staff are actually trained killers and they soon attack.

Sara goes on the offensive and takes out most of the assailants. Rip has to scream at her not to kill them all as they need information and Sara barely restrains herself. She clearly has still not lost the bloodlust caused by her resurrection in the Lazarus Pit and still feels like a monster. Rip and Sara take the surviving attacker, Mr Blake, back to the ship to interrogate which doesn’t go so well. He reveals that Rip is know by Savage and his followers as ‘Kareeb’. This name was given to him by Savage when Rip travelled to ancient Egypt to try and kill him for the first time. 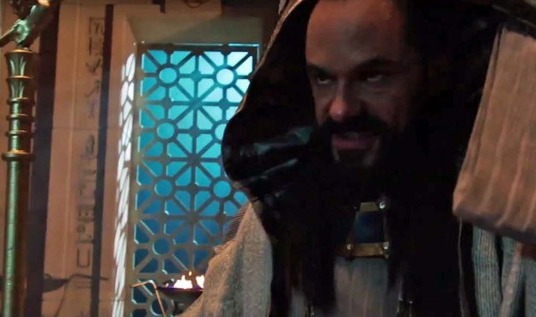 This was seen in the flashback at the beginning of the episode but Rip failed. When he had the change to kill Savage he hesitated and was captured.

The interrogation isn’t a total bust though as Mr Blake tells them that ‘The Vessel’ is Carter’s body and tells them where Savage plans to carry out some kind of ceremony on it. Sara and Rip realise they need the rest of the team to help them rescue Carter’s body but there is one problem, not all of them are on board!

While Sara and Rip have been tracking Savage’s fortune, Captain Cold, after volunteering to help Rip rob the bank, lifting a keycard out of Rip’s pocket, and going with Heatwave to see Jacks, decides he wants to go and steal a huge emerald from Central City. They convince Jacks to repair the Jump-ship so they can all travel there. 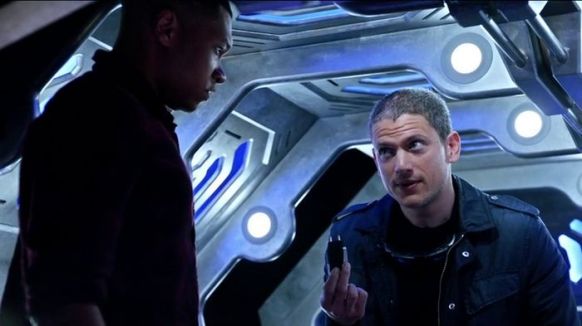 The theft goes without a hitch but when Jacks says they should go back Snart says he has one more stop to make. He arrives at his old family home and runs into his younger self.

He tells the kid not to ever let anyone hurt him and always look out for himself, but before this pep-talk can continue his father finds him and points a gun at his face. 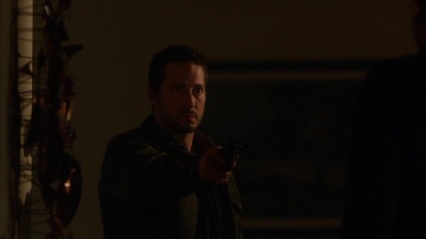 It is reveals that Snart’s dad tried to steal the emerald himself but was caught and sent to prison. It was after his release that he became violent to his family. Snart gives him the emerald so he won’t get arrested and warns him never to lay a hand on his children.

Sara and Rip have attended the event and find Carter’s body but are quickly caught. 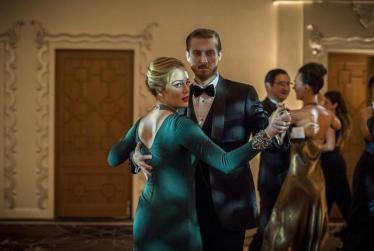 When taken to see Vandal Savage he reveals that money is not the source of his power, belief is. His followers are fanatical and are rewarded for their loyalty by being able to drink the blood of Carter. 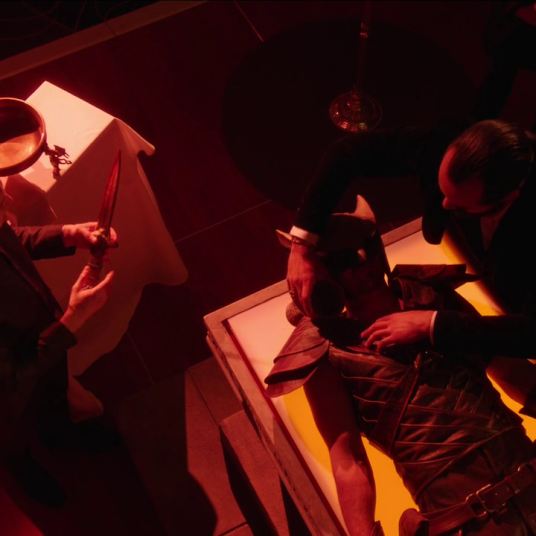 Savage is able to share his immortality through drinking this blood which will extend his followers lives by a few hundred years.

It is at this point that an unconscious Kendra senses that Rip and Sara are in trouble so Captain Cold, Heatwave and Jacks are sent to rescue them while on their way back from Central City.

The cavalry arrives and a fight ensues. Rip squares off with Savage himself and manages to beat him down!

Holding a knife to his throat Rip says he will kill Savage for his wife and son. Savage thanks him for telling him their names and when we returns he will make sure he kills them. With this Rip kills him.

Snart asks Gideon to show him the time-line that he hoped he had changed. She shows him that his dad got arrested for trying to sell the emerald to an undercover cop and still went to prison, His future remains unchanged.

The team have a proper memorial for Carter and Rip apologises for not telling the other he had already tried to kill Savage once before.

They all agree no one person can do this alone and will not desert each other on their mission, and finally they head off to 1986!!! Wahooo! a different year!!

You may ask what is going on with Ray Palmer and Martin Stein during all this. Well not much really. They decide to try and help Kendra as they discover she still has fragments of Savage’s dagger inside her which is preventing her from recovering.

Stein doesn’t think it will work but Ray has to try. We see some more friction between Ray and Stein as the latter still doesn’t remember having Ray as a student! Atom shrinks down and enters Kendra’s blood stream, he finds and destroys some of the knife fragments before his suit gets damage. 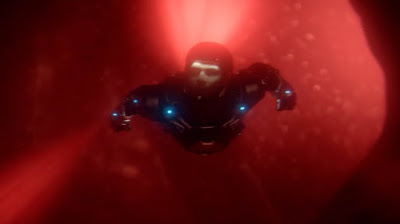 Worried that he will cause further injury to Kendra he retreats.

This knocks Ray’s confidence. He doesn’t think he can do what needs to be done and Stein tries to encourage him. It takes Stein pretending to remember Ray being his student to give him the support he needs. Ray was reluctant because he was powerless to save his fiancée before and feels the same now. 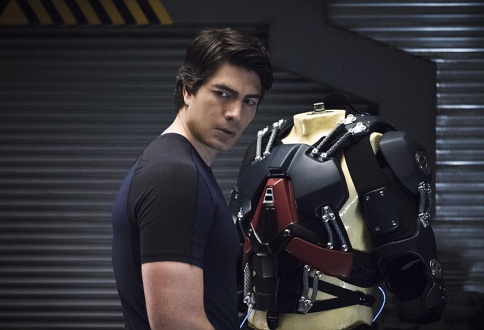 Atom manages to find the remaining knife fragments and destroys them! Kendra starts to recover almost immediately. Ray now believes in himself and knows he has the support of his team.

Here’s a few things that jumped out at me during the episode;

It was an okay episode. I’m still annoyed that they have only been to 1975 so far. I know they are now going to 1986 but we are three episodes in already and I feel like the time-travel aspect of the show hasn’t been fully utilised. I’m hoping they use it a lot more in future episodes.

The Captain Cold scenes were probably the most interesting, which is saying a lot because I usually cringe whenever he is on screen. Both Snart and Heatwave got a lot more dialogue and character development and it was good to see them as more than petty thieves.

The problem each episode has is that they all end the same. Vandal Savage is always the continuing threat. This episode showed that even if they manage to kill him it doesn’t change anything unless the Hawks are the ones to make the killing blow. Hopefully they will mix things up a bit and at least make us think some progress in the mission has been made or it will quickly become boring.

Still not a bad episode though and I’m interested to see where things go. The only useless character so far is Jackson.

Unless fused with Stein as part of Firestorm, he doesn’t really have anything to do and apparently is easily corrupted. Maybe he should be killed off? That will have major implications to the team, especially Stein!