It’s finally happened! Legends of Tomorrow is here! Now we have three CW network shows back to back and my geek mind couldn’t be happier. Legends is a welcome addition to my already packed TV schedule which now includes Arrow, The Flash, Gotham, Supergirl, Agents of SHIELD and The Walking Dead. Almost every day of the week brings a new episode so there is always plenty to talk about!

Whilst I try to contain my 10 year old self, let’s get right into CW’s newest addition. Here’s Legends of Tomorrow Episode 1 recap and review!

The entire episode moves pretty fast but it doesn’t affect the content of the show. We already know the characters that form the Legends team so there are no back story scenes for them. We are first shown a vision of London 2166, Vandal Savage has conquered the whole planet and it doesn’t look like things are going too well.

He kills a seemingly random woman and her child, after asking the boy whether he is brave like his mother or stupid like his father. 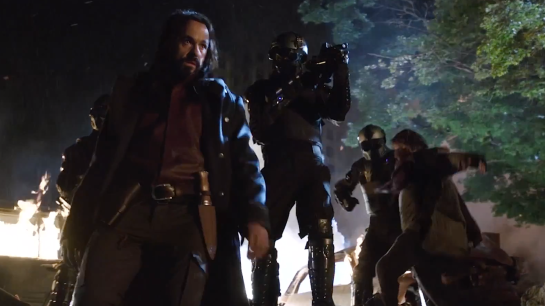 It appears he is brave as he spits in the face of his mother’s killer. Cut from this to our first look at Arthur Darvil as Rip Hunter the Time Master.

He is pleading the with the Time Masters Council for permission to change time and stop Savage, there is resistance from the Council but we soon see Rip inside a time ship prepping to go back in time and pick up a team to help him on his mission.

We now get a brief scene with each future team member as Rip goes around picking them up and flashing them with some kind of Men in Black neuraliser!

Ray Palmer aka Atom is working with Oliver Queen whilst shrunk down inside a HIVE computer.

Sara Lance is in Tibet looking for a fight, which includes knocking someone down with a shot glass! The two parts of Firestorm , Martin Stein and Jefferson Jackson are crime fighting but are still having some friction as Jackson tends to ignore the advice from Stein.

Kendra and Carter aka Hawkgirl and Hawkman are still active, but Kendra is still learning and has yet to regain all her memories. And of course Captain Cold and Heatwave are robbing places as criminals do.

Rip has gathered them all and explains his mission. If they help him they can stop Savage from taking over the world and causing widespread death and destruction. 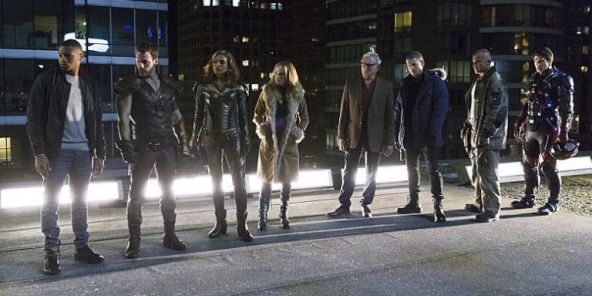 To drive the point home after some of the team are reluctant, he shows them an image of the city in 2166. It is not good. He says that the time he comes from everyone on the team is not just a hero, they are Legends!

We then get a scene for each member as they go away to decide whether to take up the mission.Ray wants to make his life matter. When he ‘died’ the world didn’t change, everything went on so he feels he needs to make a difference. He gets support from Oliver but also a friendly warning not to trust Rip to easily. 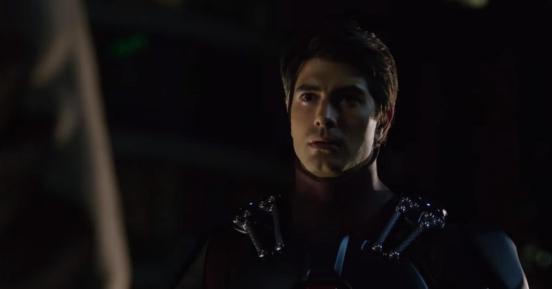 The Hawks are apparently living together now? Kendra is reluctant to join the mission and wants to run away again. Carter suggests settling the old fashioned way and whoever wins the fight decides what they do.

Sara spars with her sister Laurel who encourages her to go and instead of hiding in the shadows she should become the White Canary, conveniently presenting her with a new white suit made by Cisco.

Captain Cold and Heatwave agree that with time travel they could steal even more stuff, so they are in! 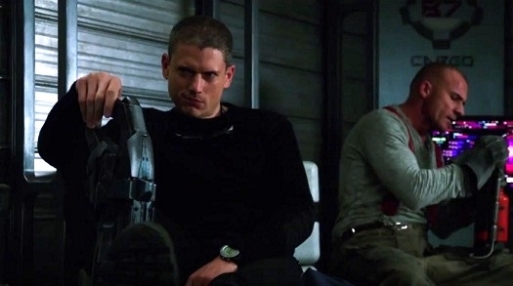 All the scenes ultimately end up the same, whether or not somebody else encourages them to go, or they decide amongst them selves, every member meets up with Rip willingly, except Jackson who didn’t want to join the team so Professor Stein drugs him! 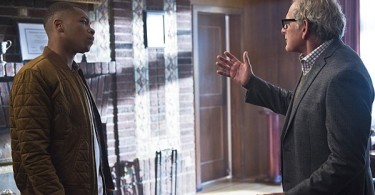 It is at this point that Stein and Ray start to go all science nerd when Rip uncloaks the Waverider ship and they start discussing how the ship could work. This conversation reveals that Ray was actually a student of Stein when he was younger but Stein doesn’t remember him, further supporting Ray’s opinion that he doesn’t matter to the world. 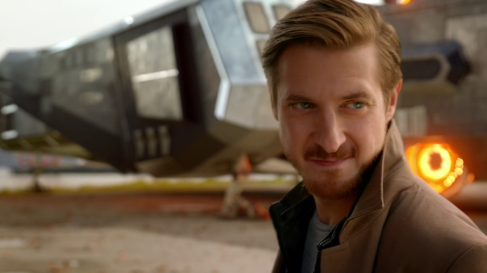 Off on their first mission the team travel to St Roch University in 1975 to find Professor Boardman, the only living expert on Vandal Savage. We had a brief glimpse of him during the Flash/Arrow crossover episodes on an old video tape. 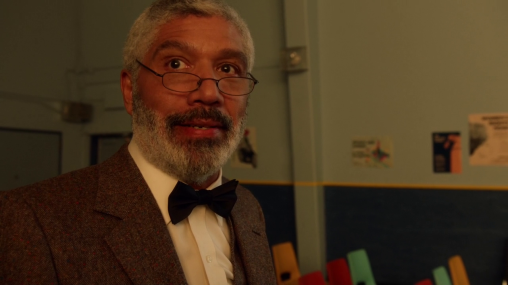 Rip explains that the professor dies a day after they arrive in 1975 and meeting him now would have the least amount of impact on the time line.

As the ship blasts away we see someone else teleport in tracking them. Very quickly we realise he is not a nice guy as he kills two bystanders because they are not integral to the timeline!

In 1975 the team find Boardman who gives them a history lesson about Savage, who has been influential in most of the worlds biggest conflict. every time Savage kills the Hawks,, their power is transferred to him which is why he keeps growing stronger. He reveals that the reason he knows so much is because Kendra and Carter were his parents in a previous incarnation.

The conversation is cut short when Stein feels that Jackson (who has been left alone on the Waverider) is in trouble and the team race back to the ship which is being attacked by the tracker Chronos, a Temporal Bounty Hunter, or as Captain Cold calls him, Boba Fett!

Rip says they have to leave now but the Hawks refuse to go without their son. Predictably although the Hawks, Atom and Firestorm all try to fight Chronos off, Boardman is shot while running for the ship, and later dies of his injuries.

The team manage to flee to Time Limbo (possible Vanishing Point?) where they demand an explanation from Rip. He confesses that he is no longer a Time Master. The Council refused to grant him permission to alter the time line so he stole the ship to do it himself.

He also lied about the team members being Legends, he chose them because they had little impact on the future. And the last revelation is that the woman and boy killed at the beginning of the episode were Rips wife and son. It was this that drove him to want to take Savage down, and Chronos is in fact working for the Time Masters to bring him in.

Rip offers the team a chance to leave but they all ultimately decide the mission is worth it and want to make a difference. When they tell Rip this, the ship is conveniently repaired enough to make another time jump!

The last scene we get is of Savage himself in Norway 1975. He says he is trying to make the world a better place, one war at a time, as he stands over a nuclear warhead! 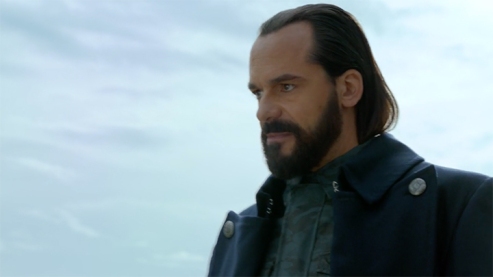 As always here some things that jumped out at me during the episode; 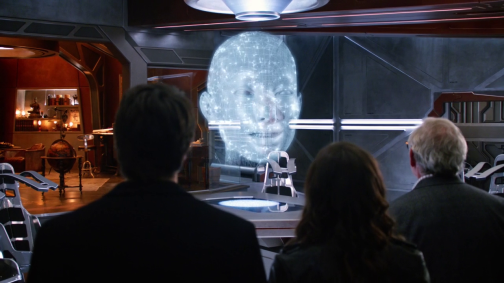 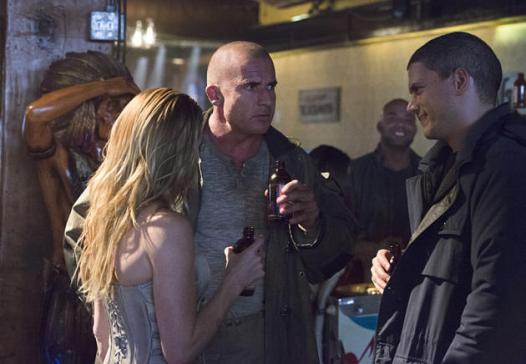 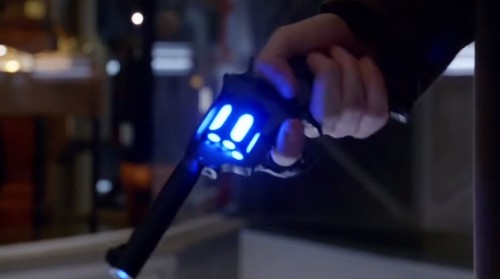 Lots going on in this episode and loads of references to various comics and nods as to possible futures for the team. I enjoyed it more than I thought I was going to. I was worried that the secondary characters from the Arrow and Flash shows wouldn’t be able to hold my interest on their own but so far they are doing okay. I look forward to seeing the next episode.

I know a lot of people will fight me on this but isn’t Rips ‘origin’ a bit reminiscent of Dr Who? Former Time Master (or Time Lord) who steals a time machine for his own purposes? And also the show that made Arthur Darvil a household name? This is mixed with a bit of Jedi philosophy as the Time Masters are forbidden from marrying and procreating, but he did it anyway!

The action was good, the character development was good, the effects were really good. If only Captain Cold and Heatwave could stop being so cartoonish!!!

What did you think of the episode, let us know in the comments below.

Don’t forget to get follow us on Twitter @JackGeekstalk and check out our YouTube channel Jack Geekstalk for all kinds of geeky news, reviews and discussions.

4 thoughts on “Legends of Tomorrow – Episode 1 – Recap and Review”