It is finally here! 10 years since the last instalment we find ourselves experiencing a new Star Wars film. Much of the fandom was sent reeling after the disappointment of the prequels but now there is a chance to restore faith in the franchise. With JJ Abrams at the helm who has expressed a desire to look back to the original trilogy for inspiration, using practical effects where possible, trawling the rough the concept artwork of Ralph McQuarrie and bringing back characters not seen for over 30 years, there was a lot of pressure on Abrams to repair the damage done by the more recent CGI heavy films.

Well I think it is safe to say that Abrams and his team could not have done any better!

This is a brand new story with new characters, locations, ships etc but you are constantly reminded of the original trilogy, not just through clever nods but also the general tone and theme of each scene. 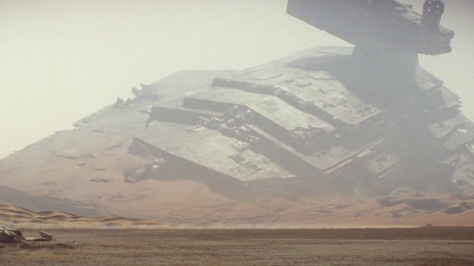 The locations are remiscient of planets we have seen before, a desert planet, an ice planet and a wooded world have all be seen before but each of these news worlds feels fresh and has its own identity.

The things that left you awestruck before will do so again! Familiar faces are back ( if a little bit wrinklier), and new faces will leave you feeling like a new generation really has begun.

Harrison Ford is Han Solo. There is no other way to say it. It may have been 30 years since his last outing as the loveable smuggler but it is just like he picked up where he left off. 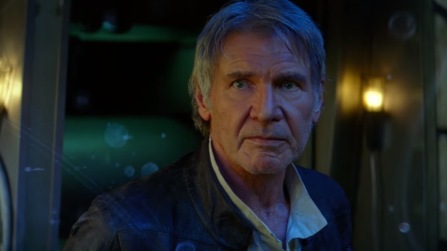 His humour, quick thinking one liners and skills with a blaster are all perfectly displayed, but we also see the softer side of our Corellian hero and I think that is what makes his performance so special. We love him because he is a fun character and a bit of a rogue, but he will also pull on your heartstrings as he shows his soft center (one scene in particular).

Carrie Fisher is back as General Leia, a leading member of the Resistance. She doesn’t get a lot of screen time but when she does you feel the regalness, strength and compassion flow from her.

Her relationship with Han may have changed slightly in the past 30 years but the love is clear. She is still not someone you want to mess with and is still fighting the good fight. I would not be disappointed to see more of Leia in future films.

Now you can’t have Han and Leia without having Luke. There is little I can say about Mr Skywalker without spoiling things but as most people are aware he has returned for this film.

A complete contrast to his recent appearances as the Trickster on CW’s The Flash, Mark Hamill is no longer the young, headstrong amateur Jedi Knight. He is older, more beardy and mysterious. I can say no more!

There are other returning characters such as R2-D2 and C-3PO but it is Chewie that is given the chance to show just how awesome he is. He is funny, loveable and kicks all kinds of ass! This was one thing that was missing from the original trilogy, a proper display of combat Chewie and he does not disappoint.

Our new faces, Daisy Ridley, John Boyega and Oscar Isaac all bring something fresh to the film. Ridley playing the scavenger Rey is instantly likeable, she draws you into her story and even though she is relatively new to the big screen she absolutely owns it.

She is an excellent pilot and has a heart of gold, your feel every emotion etched on her face whether it is joy, confusion or fear. Rey is going to be very important in future films and I think Daisy Ridley was the perfect casting. She is the heart of the film.

John Boyega plays Finn, a Storm Trooper from the First Order trying to do the right thing. Fear is what drives Finn but it is the relationship between him and Rey that warms you to the core. 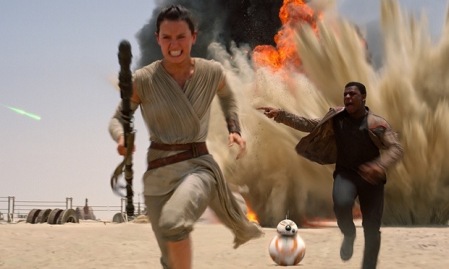 They are the new Luke and Han, very different but a perfect team, each saving the other when required. John Boyega brings an energy I have not seen for years. Never seeming to stand still, it gets you excited to see what he will be involved with next. 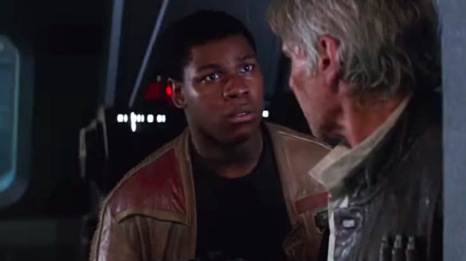 He is smart and funny but also struggling with what he has been a part of, but he is not a coward. He stands up for what he believes and will do anything for those he cares about.

Han Solo’s title of the best pilot in he galaxy has been taken. Poe Dameron is the golden boy of the Resistance and his skills in the cockpit are unmatched.

I could watch his combat scenes again and again, they give an enormous sense of satisfaction with how smooth and effortless they look. Oscar Isaac is a good fit to the role, not on screen very much but the cocky, sure-footed pilot is another loveable presence.

The prequel trilogy lacked a convincing evil threat. Darth Maul was awesome but wasted, Darth Sidious was all cloak and no dagger and Anakin Skywalker was a whining Jedi who just didn’t get his own way. The Force Awakens marks the return of  an enemy you genuinely fear.

The First Order rose from the ashes of the Empire and they epitomise all the evil parts of the Dark Side. The standard Storm Troopers have been humanised a bit and feel like actual soldiers but they do no hesitate to follow orders, however horrible they may be. There is a genuine threat to the galaxy and it is bigger than any of the films that have come so far.

He is terrifying in many ways, and you can see the Darth Vader influences in how he operates. Ren himself has an internal battle but even his own soldiers are scared of him. You definitely don’t want to get on his bad side, which a few characters find out the hard way. Because you feel so attached to Rey and Finn, you also feel like Kylo Ren is chasing you, hunting you down.

His command of the force is different to what we have seen before, as is his cross-guard Lightsaber (which I love by the way). He is unpredictable and impulsive which is what makes him so dangerous. He is my new favourite villain.

The film has brought the original trilogy into the modern day, some shots are almost perfectly recreated in a new setting. The feeling of exhilaration you get when seeing an intense dog fight between fighters or when lightsabers come to blows is as fresh as though it was the first time we had witnessed such things.

It is the little details that immerse you, the amount of practical effects is astounding and even when there are CG effects they are not over the top and have none of the smooth, rubbery mess of the prequels. The in-jokes and well known lines are there and nothing can beat seeing that opening scrawl for the first time.

A sense of nostalgia beats you over the head but you welcome every bit of it. This is Star Wars for the modern age but one that respects the original story and the fans that have loved it for so many years.

Now let’s see what the first stand alone Star Wars film will be like. Roll on Autumn/winter 2016 for Star Wars:Rogue One.

Have you seen The Force Awakens? Let us know what you thought it the comments.