The title of the most recent instalment of Supergirl sounds a lot like a magazine headline, which is probably very deliberate. “How does she do it?” sounds like an in-depth interview with one of the latest A-List stars. Kara has to deal with something that many other superheroes have had to in the past, how to balance the super life with the normal one. Up until now she seems to have coped very well but certain things are thrown at her that will complicate both her lives. Here’s our recap and review!

There are three main aspects of her life that Kara is trying to juggle. Firstly there is her job at the magazine. Being the personal assistant of Cat Grant is very demanding and this week it is made even harder because Kara offers to look after Cat’s son Carter while she is away receiving an award.

She describes Carter as a clever and curious boy, which makes me think that he could figure out who Supergirl is.

On top of the babysitting, Kara is also dealing with her feelings for James Olsen. She is aware of some sort of history between James and Lucy Lane, and during one of the obligatory ‘sister’ talks with Alex, she advises Kara not to get into a conversation about the couple as it would relegate Kara to the friend-zone! This leads to a couple of awkward conversations with James. He starts talking about him and Lucy and Kara shuts him down straight away.

To make matters worse Lucy comes to Kara for advice about Jimmy. She explains that they broke up because Jimmy always put Superman first. Lucy asks if he is seeing someone and worries that he has a thing for Supergirl. It becomes clear to Kara that the two still care about each other a lot so she ends up putting her own feelings aside and tells Jimmy to speak to Lucy about it properly. However, Jimmy says that he doesn’t want to go back to Lucy, which gives Kara that little ray of hope.

Jimmy ends up telling Lucy that they should see other people which visibly upsets her and she leaves.

But when things start going crazy across the city and people are put in danger, Jimmy doesn’t hesitate and rushes to the airport to make sure Lucy is okay. When they meet she asks him why he has run towards a bomb, he replies simply “because you’re here”. The couple may not have seen its last day.

Kara’s work with the DEO makes things a whole lot busier for her. When Supergirl is followed by some kind of drone she initially thinks the DEO are keeping tabs on her.

Hank Henshaw tells her that it is not the DEO but before any new information can be obtained from the wreckage of the drone Kara destroyed, another emergency arises. A bomb goes off in a lab causing a building to start collapsing.

Supergirl rushes to the scene and has to hold the building up while using her heat vision to repair the building supports. I must admit, that scene was pretty cool!

What Kara doesn’t notice was that she was being watched by another drone. Alex and DEO discover that the drones are actually made from Lord tech so they decide to pay Maxwell Lord a visit.

After confronting Lord about the tech it is discovered that the bomber is a former employee of Lord Tech.

Alex and Maxwell Lord appear to be getting on very well as they chat about all kinds of sciency stuff, particularly relating to the new super-train Lord is unveiling. He expresses his distaste of Supergirl and says the city is better off without her. Before Alex can properly respond to this they get an alert that there is a bomb inside Lord Tech. 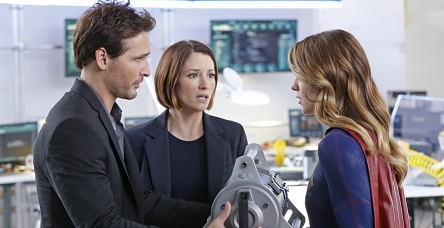 Lord tries to defuse it unsuccessfully so Alex calls Supergirl. She races to their rescue and takes the bomb out of the city and throws it into the air at the last minute.

The blast knocks her out and she falls. Coming too she sees something strange as Hank Henshaw is standing near her and his eyes glow red before she passes out.

She wakes up on a special sun-bed that uses the power of the yellow sun to restore her energy. Working with Lord, the DEO and Supergirl assume (correctly) that the next bombing target will be the new super-train’s first journey.

What makes this difficult for Kara to deal with is that she is still supposed to be looking after Carter! When she is off being Supergirl and working with the DEO she has left Carter in the care of Winn, and Carter opens up when Supergirl is mentioned. He is a huge Supergirl fan and even asks Jimmy to ask Superman to introduce him to Supergirl.

At the same time that Kara and the DEO start looking for a bomb at the train event, Winn realises that Carter has gone missing. He has gone down to the event to meet Supergirl! He is found by  Maxwell Lord and invited on the train.

Winn races to the event but is stopped by security and sees the bomber get onto the train! He calls Kara and tells him what has happened at the same time as a report of another bomb at National City airport comes in.

Against the advice of Hank Henshaw, Kara decides to trust Winn and stop the bomber on the train. Alex, Henshaw and the rest of the DEO go to disarm the bomb at the airport. Alex can’t defuse the bomb and Henshaw orders her to leave him to try and get herself clear. 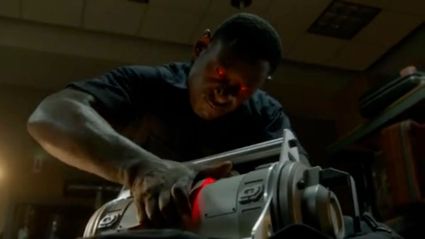 As she leaves, Henshaw’s eyes glow and he rips off the side of the bomb casing to stick his hand in. He manages to disarm it and then walks calmly out of the building explaining to Alex that the bomb was a ‘dud’

Kara locates the bomber and tries to reason with him to stop him activating a bomb-vest. He says that he is doing it for his little girl and arms the bomb giving Kara 30 seconds to save the rest of the people on the train. Using a combination of heat-vision and super strength, Kara stops the train and watches as the bomb explodes. 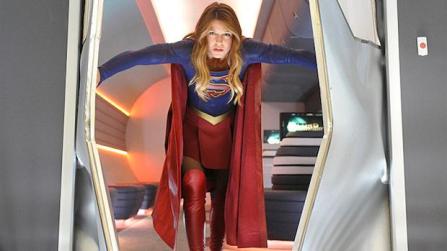 Back at the DEO Alex is examining the remains of the bomb Henshaw disarmed and is confused by the fact that it appears to be real and not a dud. Kara has become suspicious because of what the bomber said to her, she asks Winn to hack Lord Tech and pays Lord a visit. Lord takes responsibility for what happened to his former employee, but Kara challenges him and says that he was behind the bombings.

He half-confirms that he was testing her abilities, but for what purpose? He then says that he wants to find the person her made Supergirl decide to save hundreds instead of thousands, as that person is very important. Why is he so against Supergirl?

After things have died down, Kara gets a dressing down from Cat when she learns what transpired. She says she should never have made Kara responsible for Carter, even though Carter says he had a brilliant time.

Cat is trying to teach Carter that Supergirl is more than looks and that she is a hero to be respected for being a strong female. She ends up yet again being the voice of unexpected reason for Kara by explaining that she got to where she is by taking on challenges one at a time. You can learn to have everything, just not all at once! Maybe Kara can do this. Maybe she can juggle all her lives!

Here’s a few interesting things that jumped out at me!

I quite liked this episode. It was tense and funny at times. The love triangle between Kara, Jimmy and Lucy was actually engaging and even though I was rooting for Kara and Jimmy to get together I still hold out hope for Winn to be successful in his pursuit of Kara. The effects used to display Supergirl’s powers were much better and I think they will improve further in coming episodes. The motivation of Hank Henshaw is still unclear. 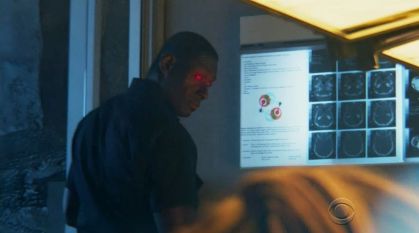 He definitely has some dark secrets, but he disarmed the bomb at the airport so he can’t be all bad. I also think we have now seen the beginning of the season’s main human villain. Maxwell lord appears to be filling the Lex Luthor position for Supergirl. I wouldn’t be surprised if we see some Lex stories transfer over to Supergirl, which I would be very happy to see!